The term ‘industrial PC (personal computer)’ has been in use for 25 or 30 years, during which time they have evolved from somewhat ruggedised desktop computers to dedicated systems that are robustly engineered so that they can stand up to the rigours of a production environment. They may be IP57 rated or even explosion-proof. 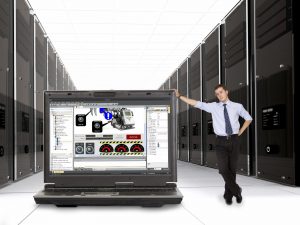 Industrial PCs are used in harsh working environments, so are designed to be rugged and reliable. They are available in a number of styles including 19in racks, hardshell, wall- or panel-mount, with single board computers, backplanes and/or COTS (commercial off-the-shelf) motherboards. They are physically robust with oversized protective parts compared to an office or home computer, while heat dissipation has to be based on a dustproof solution using large heat sinks or filter- protected fans and vents.

A style of industrial PC that is becoming popular for process control applications is the panel PC, in which a flat screen LCD is incorporated into the same enclosure as the motherboard and other components. Often the display is a touchscreen which can be used to reset sensors and actuators or to present data and information. Because they are panel mounted and thus protected they do not need to be IP57 sealed so are relatively low cost.

The most common duties for Industrial PCs include process control and/or data acquisition, although many other applications are also possible. Typically they are networked to provide a distributed plant-wide control system, which itself may communicate with a larger enterprise-wide system.

Industrial PCs are often customised to their application through the use of dedicated plug-in expansion cards that each handles a particular function.

The phrase can also be used to describe an embedded system, a computer or microprocessor within a larger mechanical or electrical system dedicated to one particular function.