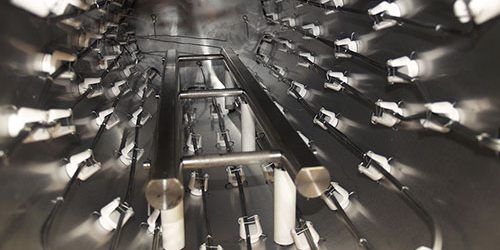 A SCADA/HMI control system originally intended only for vacuum brazing furnaces used in the aerospace industry has found much broader application. Developed by Specnow of Huntingdon, the company quickly realised that it could also control furnaces used in many sectors and further that it was suitable for equipment such as electron beam welding systems.

Specnow has built a pair of identical, vacuum furnaces for an aerospace client, one of which would be installed in the UK the other being destined for a sister plant in Mexico. They are used for brazing stainless steel assemblies that form the main bodies of linear sensors used in aircraft for monitoring undercarriages. Knowing that the user operates to NADCAP (the National Aerospace and Defence Contractors Accreditation Program) standards Specnow fitted Movicon, a high functioning but cost effective SCADA/HMI control system.

Produced by independent industry experts Progea and available in the UK through Products4Automation (P4A), Movicon is a visualisation and automation software package that is designed to improve productivity, reduce integration times and manage operating costs by optimising asset utilisation.

Robert Brown of Specnow recalls: “We looked at several alternative control options but often found that behind their smart user interfaces the underlying technology was not so good. We were worried that they would be unable to provide the sort of long term reliability we were looking for. Movicon offered a good platform and plenty of functionality, so suited the original application very well.”

The technologies incorporated into Movicon are based on a modern coding platform offering users a SCADA/HMI platform that is reliable, powerful, easy to use and proven through applications around the world. Combining power with simplicity; Movicon offers features such as an intelligent editor, vector-based graphics and touch screen operation. It has an all-in-one software platform from Windows CE to Windows 10 meaning that it can be used on small applications yet is equally at home running entire manufacturing plants.  It has a high functioning database and connectivity capabilities, making it ideal for automatically compiling traceability records. It also offers alarm management, report writing and high levels of security.

Furnaces fitted with a Movicon SCADA/HMI control system can log operating data whilst also recording batch information and generating a number of different detailed reports. The Movicon system logs all data directly to an SQL database for quick access without the requirement for an intermediate historian system. In fact Specnow was so impressed with the performance of Movicon that the team there is using it in over 25 systems on both new build and re-engineering projects.

Brown again: “Vacuum furnaces and electron beam welders are mainstream products for us. They are customised for each application and delivered as a turnkey solution. We also design and supply special plant such as induction vacuum rigs, and miniature jigged assembly processors for precision heat treatments. Many of our clients operate several furnaces and our Movicon SCADA solutions allow them to be operated from a single control station.”

“These industries all have a very high regard for safety and reliability and have developed systems and standards to ensure these,” says Paul Hurst, founder and MD of Products4Automation (P4A). “Of course this attention to detail has cost implications, but Movicon is helping redefine production costs while also making record keeping and data analysis easier. The user experience, in concert with the integration process is proving extremely successful in the UK market due to its ease of use, openness and connectivity, compliance with multiple standards, reliability, security and reusability.”

Movicon SCADA is based on XML and Web Services technologies, so provides rich graphical content that displays quickly and works extremely well with today’s hardware, mobile and network communication platforms. It is modular, so bespoke systems can easily be built for each application. Expanding or altering the system at a later date is also straightforward.

Brown provides a final illustration of the Movicon’s combined power and simplicity.

“Our systems are used around the world, including Europe, Central America and Asia, so they have to be usable in many languages. When we first started exporting to China I thought getting the controls to work in the local language would be a major effort, but in fact everything was sorted out with less than a day’s programming.”