A PC based SCADA system has been used to upgrade a fire behaviour training rig at Staffordshire Fire & Rescue Services Headquarters. This is used to show fire fighters how fire spreads through buildings, where temperatures build up fastest and which parts can be expected to remain relatively cool. 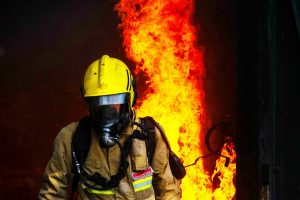 The control system monitors the temperature within a number of training rigs to drive read outs that display the temperature at a number of different points in a burning building. It also logs readings to a real-time archive and sounds an alarm if the temperature in any area approaches a defined safety level. The rigs can be used individually or integrated to simulate a larger fire.

At the heart of the control system is a PC based Progea Movicon SCADA operator interface station, which is located near the training rig in a classroom environment. This was supplied through Progea’s UK representative P4A (Products4Automation) to systems integrator S&H Systems Design and Installation Ltd, who managed the upgrade project.

P4A has supplied Movicon SCADA systems to many different applications, from the traditional industrial process industries, to dairies, distilleries and other food and beverage plants. The software has proved itself for water treatment works and distribution networks, marine man overboard locators, green energy plants, steel mills and automotive plants.

At Staffordshire Fire & Rescue the Movicon system monitors and records the operating temperatures, displays real-time figures and trend graphs of the temperatures, archives and analyses the readings, and allows configuration of the alarm set-points.

The archiving is in real-time and coupled with the high-speed graphics, which allows the temperature trends to be replayed back to the trainees straight after an exercise. They, and their highly qualified instructors, can then discuss in detail the different effects of various fire fighting techniques on the temperature at multiple points within a burning building.

The temperatures, alarms and data relating to the users’ actions are stored locally on the PC and archived to the Fire & Rescue Services’ main server. This provides both short and long-term traceability of the training situations that the trainees have been exposed to. It also generates a record of the warnings of when pre-agreed temperature limits are about to be exceeded, which can be used to identify individual fire fighter’s successful decision-making sequences and for condition monitoring of the equipment.

Based on Movicon NExT, Progea’s revolutionary future-proof SCADA platform, the fire training rig is fully modular, scalable and open. Movicon.NExT is designed so that users can easily achieve optimum solutions for HMI, supervision, MES, historian and analysis duties, yet it also provides a flexible solution that can be reconfigured if requirements change. Further it can easily integrate with cutting edge technologies and solutions, such as 3D graphics, animation, multimedia, augmented reality, Industry 4.0 and the IoT to expand systems capability.

Paul Bunn at S&H Systems says, “After four months of use, the fire trainers have given positive feedback regarding the ease of use of the system, security of data and the reliability/stability of the control system. Since these were key parameters set-out when we embarked on the project that is a great compliment to us and the software we chose to build the system around.”

S&H Systems has been supplying control systems for fire training rigs and many other applications for over 20 years now. It has an international client base and installs and supports systems worldwide. Mr Bunn says that standardising on the Progea Movicon/NeXT SCADA platform from P4A ensures a cost-effective solution for both basic HMI and complex SCADA type applications.